DUBAI, UAE: Super Boxing League (SBL) is presenting Amir Khan Crypto Fight Night on October 16, 2021 at La Perle in Dubai. The first of its kind event, supported by the World Boxing Council (WBC) and Savy Capital, will showcase Dubai as the future hub of blockchain while bringing the city’s growing crypto and boxing communities together for epic showdowns. Some of the world’s most notable crypto traders will face off in the ring to support the Amir Khan Foundation. 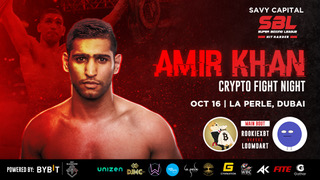 SBL’s CEO and founder Bill Dosanjh is proud to align his organization with the transformative crypto community and be part of efforts to help position Dubai as the blockchain capital of the world. “As the first-ever combat sports promoters to leap into the crypto space, SBL is eager to contribute to UAE’s vision for an innovative future,” Dosanjh said. “This association will help build the sport amongst the young business- minded generation whose forward-thinking mindset aligns with SBL’s core values.”

The SBL hosted the India Season in League Format followed by Jeddah Season becoming the first combat sports promoter to introduce boxing in the Middle East. The WBC supported SBL Jeddah Season and also designed a special WBC belt for the International Title (Amir Khan vs. Billy Dib). The SBL Crypto Fight Night is set to make history again in the Middle East with the first-ever WBC crypto belt, specially designed by the WBC.

Amir Khan, SBL’s Chairman and two-time boxing world champion expressed excitement about the event, noting that SBL is making history by being the first promotions organization to partner with the crypto community. “By associating with crypto, we will further augment our endeavor to reach like-minded groups who believe in innovation and transformation,” he said, adding that audiences should “be prepared to witness high adrenaline action unlike anything they’ve seen before.”

For the main fight, RookieXBT, one of the world’s youngest and most respected crypto traders, will battle it out with Loomdart, a world-renowned crypto investor, and partner at leading VC firm eGirl Capital. It is the first time the crypto community will see the two top stars, which are typically viewed online only as avatars, live in action. For the co- main event, The WBC Asia Heavyweight Title is also up for grabs with an exciting showdown between two huge punchers in the heavyweight division, which sees New Zealand big-hitter Hemi ‘The Heat’ Ahio (17-0-0, 12 KO’s) in a seismic collision with Dubai KO king Mohammad Ali Bayat Farid (17-2-1, 17 KO’s) for the Vacant WBC Asia Heavyweight Championship.

In addition to the main and co main events, there will be three highly-competitive contests between some of the world’s most powerful crypto traders which will also take place on the card, featuring: Profit Maximalist podcast host Luke Martin versus whizz-kid trader Barney The Boi, leading British trader Adam ‘Cass’ Craigmile vs. American hot-trader Ahmed Mousa.

All earnings from the fight night will be donated to Amir Khan Foundation, a foundation founded by two-time World Boxing Champion & Olympic Silver Medalist Amir Khan in 2014 and has since responded to causes, projects and emergencies across the world. Our core objective is to support communities globally, especially through health, fitness, and sport. The event will also feature auctions of various crypto related assets, collectibles, and NFT digital art, with all the funds raised to be donated to Amir Khan Foundation.

The crypto industry revolves around decentralization, making money more global and accessible to all. In that inclusive spirit, a spokesperson for Savy Capital, the event’s crypto community partner said, “The crypto community is a robust group of individuals and companies that are dedicated to making a difference in today’s society. We are proud to bring them together with the combat sports community in partnership with SBL, where we can showcase to people the winning spirit, high octane energy, and philanthropic personalities of all involved.”

Roy Blackstone, the event’s powered by sponsor said, “SBL and Savy Capital are combining to give the world the first event that merges the boxing and crypto communities in Dubai, one of the world's most incredible cities. This night will help to bring awareness of both of these communities to the mainstream, and I am proud to support the very first fight night.”

Bybit, another powered by sponsor said, “Crypto and boxing have a lot in common — striving for excellence, keeping one’s composure in challenging circumstances, being resilient enough and coming back again and again even when getting knocked down, and not to mention being often misunderstood. The pandemic has taken a toll on sports and other sources of joy. We at Bybit are glad to be able to help bring some entertainment back, and add a little excitement to the lovers of combat sports and crypto.”

Another event partner, Sheikh Almualla bin Ahmed Al Mualla, founder of Ghaf Capital hopes the activations will be a way to blow off steam after a difficult year. “We're excited for an amazing evening with our fellow blockchain pioneers and the athletes attending,” he said. “In a way, it's metaphoric of what many of us have lived through last year, taking punches and getting knocked down. It's going to be a great reminder that no matter what punches life throws at you, keep your hands up and keep swinging!”

During fight week, crypto-trading fans will have a chance to meet their legends live during a series of activations including face-offs, in-mall events, and more.

In 2020, Amir was named President of the WBC Middle East Boxing Council, putting him at the forefront of efforts to build out the sport’s exposure in the region. In 2021, BBC released the highly-anticipated first season of “Meet the Khans,” a reality show following Amir and his wife, Faryal Makhdoom. It quickly reached #1 on BBC’s iPlayer chart. Although the world-renowned fighter is training for the final matches of his career, he is turning his energy to the promotions arm of his brand and seeking global partnerships that align with his future business endeavors. Not only Amir, but also his family has also made phenomenal contributions in the combat sports fraternity. His younger brother Haroon Khan (Harry) is a Commonwealth Games Bronze medalist, while his cousin Abdul Khan is all set to make his pro debut in the SBL’s Amir Khan SBL Fight Night. In addition to his professional accolades, Amir is also a well-known philanthropist. Through the Amir Khan Foundation and the Amir Khan Academy, he is involved in a number of charitable initiatives internationally.

The Amir Khan Foundation was established in 2014 by the two-time World Boxing Champion & Olympic Silver Medalist Amir Khan. It aims to provide support to those most in need, at home and abroad. Since its inception, the Amir Khan Foundation has responded to global emergencies and facilitated developmental projects across the world. The foundation exists to support individuals, families and communities globally, and to offer relief and support during times of hardship, urgent need and upheaval.

Owned by East West Sports LLC, SBL is the world’s first franchise based boxing league. The brand has a distinct and localized value proposition including a unique and patented point scoring system. SBL’s vision is to create the largest global localized ecosystem in sports' history and to be the world's largest sports entertainment company with an innovative sports technology focus, producing 2,500 hours of content annually.