The High-End Congress of Economic Diplomacy event hosted and organized by the International Union of Bilateral Chambers of Commerce and Industry of the United Arab Emirates (IUBCCI UAE) is set to have its first edition on Wednesday, the 20th of October 2021 and fixes a high objective: to discover and set the new economic trends in the world order. 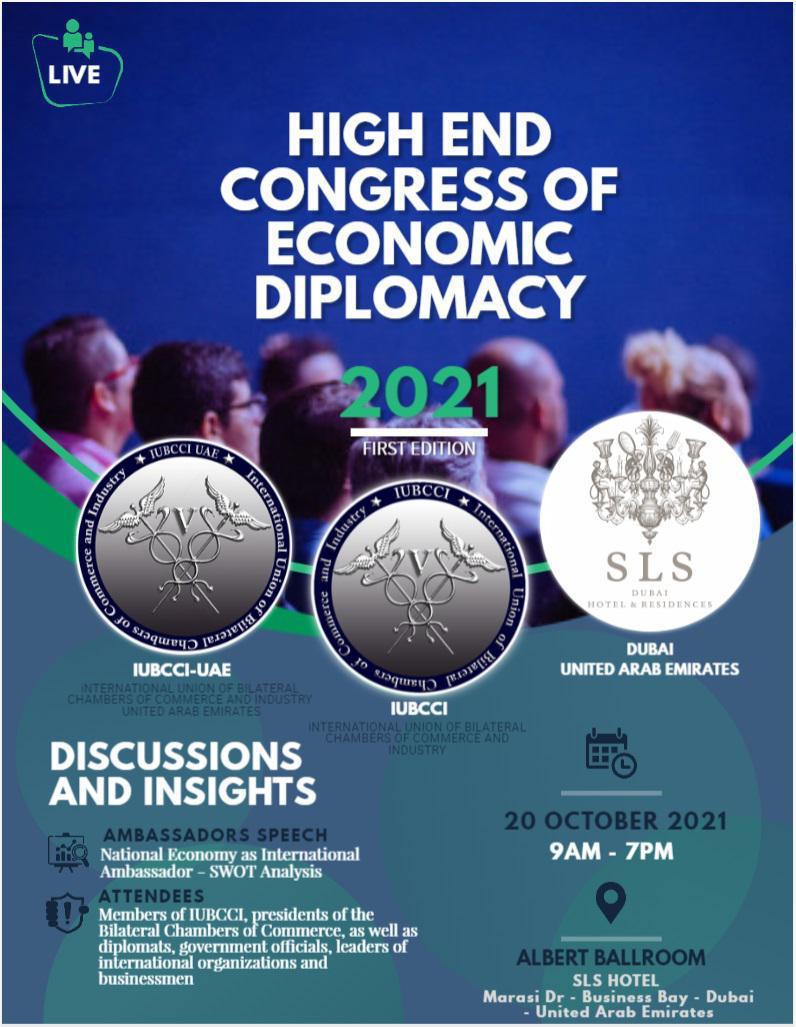 IUBCCI UAE is a non-profit organization of bilateral chambers of commerce and industry and all trade unions, federations and joint business councils in the world, that aims to create and promote a common economic interest, a safe business environment in which all companies, even small and medium sized businesses can prosper and develop. Furthermore, through the aim of this Congress, the IUBCCI UAE has set to consider and debate economic opportunities worldwide in the context of the global economy.

The Congress will be attended by a considerable number of ambassadors to the UAE, who will present their country’s strategies and plans for the short and medium term – the areas they are interested to invest in, how they will help national as well as foreign investors, the fields they plan to attract investments in, the business environment they have or want to achieve in their countries.

Amid the countries that have already confirmed their presence to the Congress are: the UAE, Rwanda, Kazakhstan, Brazil, Luxemburg, Venezuela, Pakistan, Romania, Republic of Moldova, Czech Republic, Finland, Lebanon, Ukraine.

During the Congress, there will also be several private investors attending and speaking, presenting their companies and plans for economic development. There are various fields represented, from security companies to medical companies, from fashion designers to heavy industry and from IT to oil industries. The variety of fields represented was expressly chosen in order to set a clear framework for the outcomes of this Congress, which aim to create a new horizon for the future of the world’s economy.

Among the private investors that have announced their participation we may find Adenine by OK Medical, Business Connect, Kazakh Invest and many others.

Furthermore, the Congress has a debate part, in which participants can take place and shape new ideas for the future; so far participants from 5 countries have announced their participation in the debate: Romania, Kazakhstan, Brazil, Luxemburg and Pakistan, but the list is still open for further participations. The topic of the debate will be the configuration of the new economic world order and how it will affect various businesses.

This meeting in which more than 50 states will be represented is a step forward in global cooperation and business growth allowing the participating states to discuss, debate and find solutions to pressing economic issues that touch not only a part of the countries, but the entire world.