UAE’s bespoke jewellery brand, Amira, unveiled their limited edition “Unity” collection during the exclusive event held at their outlet in Marina Mall, Abu Dhabi. The handcrafted, unique designs of the collection pay tribute to the nation leading up to the 47th National Day celebrations.

During an event attended by UAE’s leading celebrities and influencers, the collection that was maintained under wraps was revealed by renowned Emirati actress, Fatima Al Hosani in the presence of Mr. John Paul Alukkas, Executive Director & Mrs. Sonia Alukkas, Director of the Joyalukkas Group which Amira is a part of, as well as notable personalities from the world of television and social media including Marwa Mohammad, Oraib Hamdan, Shahad Al Khatab, Meera Ali, Elham Al Rabeea, Zain Awad, Ali Ajami and Menaim Jarouf.

Wings of Unity, Dance of Unity and Bloom of Unity are the three distinctive pieces in the collection yet all connected by the presence of 7 dazzling diamonds representative of the Unity of the 7 Emirates that accounts for the strength of the nation. Each piece individually signifies a beautiful characteristic of the country; an exquisite butterfly that reflects the grace with which the UAE soars, seven moving diamonds that move to the rhythm of its progress and the blossom that illustrates the coveted position UAE holds in the world today, rising from a glorious heritage represented by 7 strings of pearls.

The collection was received with much acclamation for being symbolic of the country and the features that define its glorious success. “Unity” is be available across all three Amira stores in Dubai Festival City Mall; Marina Mall, Abu Dhabi and Manar Mall, Ras Al Khaimah.

AMIRA, part of Joyalukkas Holding Inc. with its stores in Dubai Festival City Mall; Marina Mall, Abu Dhabi and Manar Mall, Ras Al Khaimah. AMIRA caters to all the young women in the Middle East with its trendsetting pieces. The brand flaunts exquisite designs of jewellery with exclusive designs, collections and exceptional service at their stores. AMIRA is also the exclusive partners for ALLOVE diamonds in the whole of Middle East. 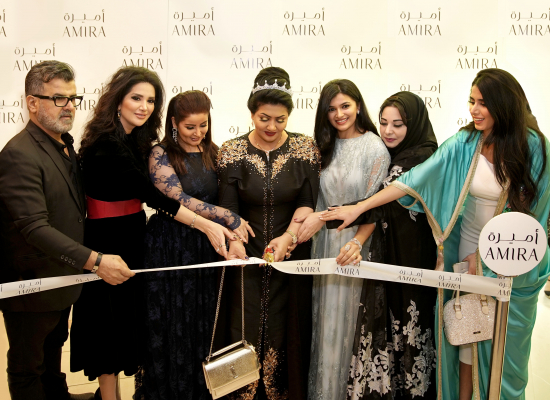